What Are Ghosts & How To Exorcise Them by Mike Williamson 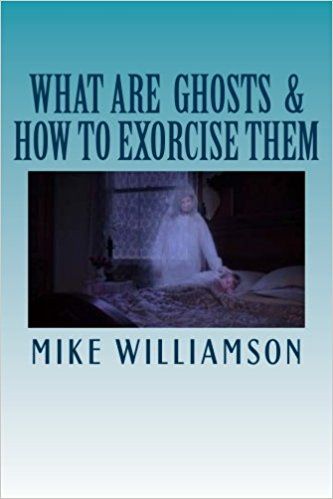 This book is a partial history of religion and its beliefs, and how they impact on our thinking about the supernatural. I have tried to show how the views of early man have had such a significant influence on the thoughts of people today. This includes the belief in the devil, demons, poltergeists, ghosts, and evil spirits. Discussions include the following:

Even today, there is a belief in lucky charms and superstition that runs through our everyday thoughts. The examples of possession and hauntings that we hear about more and more are nothing more than the spirits of people who have died playing on our beliefs. For example, if you believe the devil is attacking you, then that’s what the spirits will show you. They will prey on your fears to get the greatest effect. The more you believe you can be attacked by demons, the devil, ghosts, and the like, the more vulnerable you are to interference.

As medical science becomes more advanced, fewer people believe disease is the work of evil spirits. Yet even today there are places around the world where exorcisms are performed to cure people of disease. How do religious rituals still play a big part in supposedly removing unwanted spirits, regardless of whether they are evil or lost?

I have examined how and why spirits get lost and show examples of how to help them find peace. Some spirits may not even know that they are causing discomfort and pain to the living. I have discussed the different beliefs of some of the major religions regarding life after death, and how they aim to attain eternal peace.

Click here to buy What Are Ghosts & How To Exorcise Them.